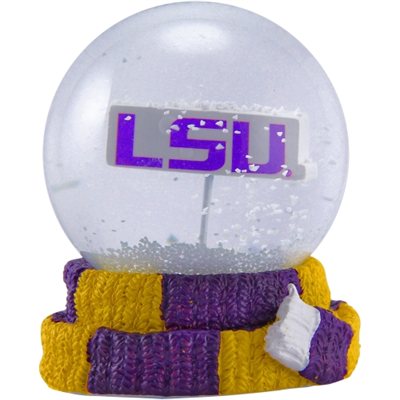 We are sorry. But at this time these snow globes are no longer available. 11/2020

Snow globes are fun, collectible items that many people enjoy displaying around the home or office. For the sports fan, a snow globe featuring their favorite team makes a great gift idea. Fanatics offers a great selection of both professional and college sports team snow globes that showcase your favorite team. Keep in mind that there are many other professional sports teams and college teams available besides those mentioned in this article.

Fans of the Ohio State Buckeyes can show their team spirit with this adorable snowman snow globe. Snow globes measures 5.5 inches tall and features clear globe with friendly snowman in the center. Snowman is wearing the school colors of red and white and is holding a brown football in one arm and holding up a wooden sign in the other hand. Sign has two arrows, one pointing towards the North Pole, the other pointing toward Ohio. Base is red and features the words “Ohio State” in the center along with the “O.” On each side of the logo are green ivy leaves and snowflakes designs are imprinted into the red base. Resin base and water filled glass globe. Not intended to be used as a toy. This is just one of the many college snow globes available.

Hockey fans of the Chicago Blackhawks will be thrilled with this little snowman snow globe. Resin base and glass globe comes filled with water and plenty of snowflakes, perfect for hockey season. Snowman is wearing a sweater in team colors red and black and holds a wooden sign in one hand with two arrows. One arrow points to the North Pole, while the other points towards Chicago. Red base with black trim features the Blackhawks chief face logo and has a cluster of green ivy leaves on each side of it. Embossed snowflake patterns decorate the base. Snow globe measures 5.5 inches tall and has four felt feet on the bottom to prevent scratching of surfaces.

Another style of college snow globes features the team emblem with what looks like a scarf wrapped around the base (“scarf” is made of resin and serves as actual base). Fans of the college team the Texas Longhorns will love this snow globe that features the Longhorn logo in the burnt orange color in the middle of the globe, along with plenty of snow. Burnt orange and black scarf with white fringe wraps around base of globe. Glass globe and resin base. Measures 5 inches by 4 inches and foam feet on bottom of base prevent scratches when sitting on surfaces.

**Note: This particular team also has a snow globe in the snowman style.

Fans of Boston Bruins original six hockey will appreciate this snow globe with the legendary black and gold spoked “B” proudly displayed in the center. Base of the snow globe features a black and gold “scarf” with white fringe wrapped around the base. Glass globe comes filled with water, while base is made from resin. Globe measures 5 inches by 4 inches.

Bruins fans may also choose from the snowman style of snow globe.

Florida Gator fans will love this item in the line of college snow globes offered by Fanatics. Center of clear glass globe features the Gators logo of the green gator showing his teeth, surrounded by the orange and blue team colors and plenty of snow. Resin base has a blue and orange “scarf” with white fringe wrapped around it. Globe comes filled with water and measures 5 inches by 4 inches and has four foam feet on the bottom of the base to protect surfaces.

Florida Gators fans also have the option of adding a snowman version of the Gators snow globe to their collection.

Even though baseball isn’t played during the months when it snows, baseball fans need not be left out when it comes to snow globes. This Boston Red Sox globe features the decorative “B” team logo in red with navy blue border, sitting in the middle of the globe amongst the snow. Base of globe is a white fringed scarf in the alternating colors of red and navy blue. Glass globe comes already filled with water, and base is made of resin. Foam feet on bottom of base protects surfaces where snow globe is placed.

Show your school and team spirit by displaying college snow globes like this one for the Kentucky Wildcats. Cute little snowman is dressed in a blue top hat and blue sweater, representing school colors. In one hand he holds a brown football, while in the other he holds up a sign that shows us which way to the North Pole, and which way to Kentucky. Glass globe holds snowman in center, along with plenty of snowflakes. Base is made from resin and is blue with a white border. In the center is the white UK logo. One each side of the logo are green ivy leaves, with embossed snowflakes around entire base. Measures 5.5 inches tall and is not intended for use as a toy.

For the Patriots football fans, this snow globe measures 5 inches by 4 inches and comes with the emblem of the Patriots in red, white, and blue in the middle of the glass globe. Coiled around the resin base is a scarf of alternating red and blue colors, complete with white fringe. Surfaces are protected from scratching thanks to four foam feet placed on the bottom of the base.

Fans of Louisiana State University teams will love this snow globe featuring the LSU logo in colorful purple letters. Logo rests in center of snow globe, amidst all the snow. Base consists of a purple and gold scarf with white “fringe” wrapped around it. Snow globe is made from resin and glass and measures 5 inches by 4 inches and is hand painted.